The abuse of the child’s voice in high conflict separation

By Nick Child / 28 Jun, 2017 / Clinical Practice, Family Law, Raising Awareness, Role of the State, The children, The Families, The Research, The System, Views of the Child / 6 comments

Here in Scotland, Relationships Scotland (RS) held an event on the Voice of the Child in Separation and Divorce (June 2017). Professor Jenn McIntosh presented her work. She is a researcher and child inclusive practitioner from Australia. Professionals from a wide range of agencies heard about best practice from other parts of the world.

Here and across the world ‘the voice of the child’ is a hugely important issue. Head of RS’s Family Mediation services, Roseanne Cubitt, wrote in the Scotsman and on RS’s own blog. Here’s my – Nick Child’s – response:

Thanks for your event and the article in the Scotsman.  I’d like to comment wearing the hat of a retired child psychiatrist and family therapist, and with a special interest in high conflict separating families, from long ago and more recently – and a wider interest in the similarity of harmful coercive patterns in families and other groups.

You really have to mention the issue of how, like any one of us of any age and any maturity, children and their views are influenced by others. If you take children or anyone’s views or feelings without considering who and what they may have been influenced by, you will make grave mistakes.

And, if you don’t take influence into account, you will add even more harm to already stressed out and emotionally harmed children. What’s more, that harm will be caused by well-meaning parents and helping professionals who think they’re doing the child a big favour!

You in RS and its experienced family mediation service and staff don’t need anyone to tell you this:  But yes, of course children should be sensitively and appropriately involved when parents separate.

Most separating parents – on their own or with some extra help (like yours in RS) – can manage to do that even while they are embroiled in difficult processes themselves. In those families the children are likely to be confident enough of their own feelings and views, and safe and confident that their parents will listen and explain while the adults make good plans after separating.

We know that what children mostly want is to be involved and heard but not to be responsible for making decisions. Yours and everyone’s research and literature tells us this.

In particular they do not want to choose one parent over the other. They want to have a relationship with both their parents. Even if a parent has done stuff, that parent is still their parent, and children will hope that someone can help repair or make safe a continuing relationship with them. Even convicted family members in prison have dedicated services to ensure family relationships are sustained.

The idea that conflict is best resolved by evaporating one of the child’s parents has operated for many years. But we are now way beyond such a simplistic solution. See this Scottish case too.

In not wanting to choose, children are being more sensible than the present dominant culture in many countries. The dominant view is that children’s voice be increasingly turned into their being the chief witness and decision-maker between conflicted parents in cases where the parents and professionals can’t think of a better way to make decisions and to protect the children from these terrible and harmful responsibilities. 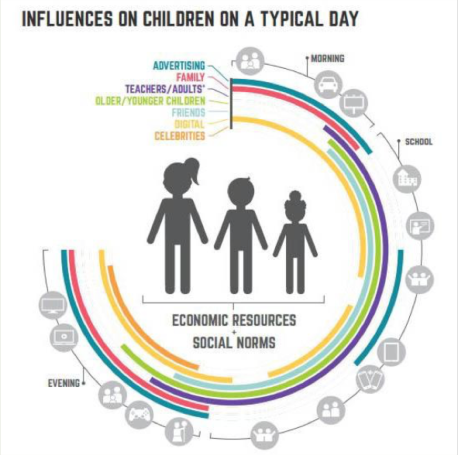 The world knows that every one of us all the time and at any age is influenced – for good or ill – by dozens of people and social pressures around us. At all ages we all need to have good information, space, time and a choice of others to help us think things through. Without that, we cannot sustain our sensible thinking or understand what’s going on around us.

Children – even into adulthood – are not mature in their thinking and understanding. That’s a definition of younger children – they’re immature. So they are even more likely to be influenced by their close family around them, dependent as they are on those primary attachments.

But even when we are mature and able to think, we are still easily influenced. The point is not that (adults or) children don’t have valid experiences or well-based views to tell. Of course they do. Children can be very observant and bright. But you don’t know the full picture in conflict situations without looking at the influences there may be around the child.

This influence on children is even more likely when the distress and high emotion and conflict of separation happens. And when emotions and conflict and loyalties run high, then they are often sitting ducks for parents  to consciously or unconsciously influence them to side with them (in those cases of highest conflict).

How to take children’s views reliably

So it is quite astonishing when so many people talk of isolating the children in high conflict families to ask them their views – even relying on administering a standardised questionnaire to do it!! – and then to assume that their expressed views and feelings are somehow pure, pristine and to be taken as objective fact and informed judgement when there has been no consideration at all for what may have influenced their views and feelings.

More likely, one side is pleased to hear what the child says, because that is what they have been wanting to hear the child say because it echoes their views and not the other side’s views.  Of course, children are not daft and will sense or know well – or be desperate to keep in with – whoever it is that wants to hear what.

We know how in families and in other groups coercive control and “Undue Influence” operates on adults (let alone kids) to enslave them to a faulty and damaging view of the emotional abuser. See Alexandra Stein’s recent book: Terror, Love and Brainwashing, about how coercive relationships create disorganised attachment patterns that ensure the submission to the coercion, the entrapment and the destruction of the victim’s capacity to think properly (while simultaneously obeying the coercer and looking like they’re as happy as Larry to the outside world)

Do we seriously think that a child in the midst of a high conflict separation is somehow unaffected, rises above, all these conscious or unconscious pressures and processes?! Of course not!

In Scotland, the training of those with even a small unqualified role in assessing separated families for courts requires that they know about ‘undue influence’ on children. We must all stop ignoring it.

The extreme unreliability of children’s wishes and feelings

A few years ago you yourselves at RS ran a workshop with Dr Kirk Weir whose court case experience is internationally regarded as evidence of The extreme unreliability of children’s ascertainable wishes and feelings in intractable contact disputes.

His approach to assessment for these high conflict court cases is to carefully meet, in an appropriate way, the child and each parent, to assess how they actually behave with the parent they say they hate and don’t ever want to have in their lives (a very strange thing for any child to say by the way).

If that’s true even of some severest separation conflict situations, then it behoves us to mention at every opportunity how a child’s voice needs to be heard for sure, but also to be properly considered within a broader and skilful assessment of the influences and relationship patterns around them. Let’s all remember to mention this when we talk about the voice of the child.

There’s no such thing as an uninfluenced voice of a child.